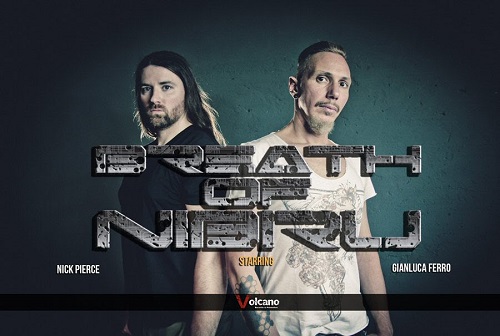 BREATH OF NIBIRU was formed in 2012 by solo guitar legend Gianluca Ferro (Bouncing The Ocean, Doomsword, Time Machine) and progressive metal drummer Nick Pierce (Unearth, The Faceless, Culling the Weak). This duo blends complex time signatures and heavy groove in to one crushing package, their extremely diverse writing and conceptual approach to flow makes for a cutting edge listening experience. Breath of Nibiru’s newest album “Skyline Bazaar” unveils territory in the metal genre previously unexplored. From Gianluca’s technically astounding solos to Pierce’s drum and bass influenced groove, there’s never a dull moment from start to finish. Much of the albums foundation is backed by pocket groove and laced with synths and solos that would make this duo sound not from this Earth. Each track is meticulously crafted to a theme that alway keeps the listener on their toes. Packed with dynamic and epic song structures, “Skyline Bazaar” is as progressive as it is punishing.
From the beginning of Breath of Nibiru there was never a set musical direction or genre to fulfill with the music. By writing as much as possible they discovered their strengths and harnessed each others musical ability to elaborate and expand ideas. Over time the progressive approach the duo had to writing spawned unique song structures which embraced spacey themes and otherworldly atmospheres. Midway through the writing of “Skyline Bazaar” they found their niche in focusing songs around synths and grooves to create an almost “cinematic” experience throughout each track. To them each song had to be formulated to represent a visual experience just as much as an audible one.