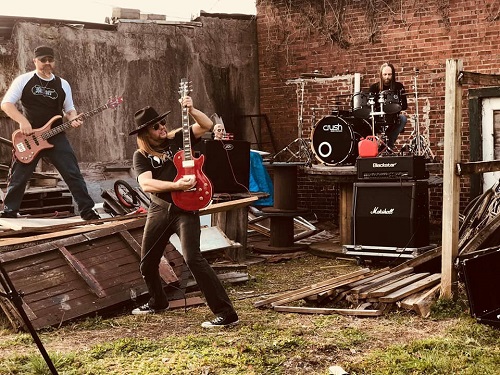 American actor, Lee Vervoort, best known for his role as a Savior in Seasons 6 and 7 of AMC’s “The Walking Dead,” plays the lead character. The video shows a man (Vervoort) in the middle of a mid life crisis, reminiscing of his childhood and visiting places where he would play as a kid. His childhood self is played by the young actor, Charlie Harden. The video also features award winning tattoo artist, Tim Harden. Video production was handled by Luminous Midnight Films.

“This is a song about dealing with depression, and that’s a thing I’ve been fighting with since I was a kid. It affects everybody at one point or another” says Bonnet. “This is the last song on my record, and could be my favorite on there too. It’s dark and moody, but with a 70’s vibe. Tracii Guns put B3 organ on the track and gave it almost a Deep Purple feel. It’s totally killer.”

Bonnet and Vervoort met at a bike rally in 2017, and were mutual fans of each other’s work. “Lee knew of me since the 90’s when I was fronting my metal band, Disarray” reveals Bonnet. “Disarray released 5 records over the years (including discs produced by Dave Brockie of GWAR and Gary Meskil of Pro-Pain), and Lee knew that material inside and out. Of course I’m a big fan of his acting as well, so we really wanted to do some work together. This video was perfect for that.”

Sinner With A Song is available on all digital outlets now.