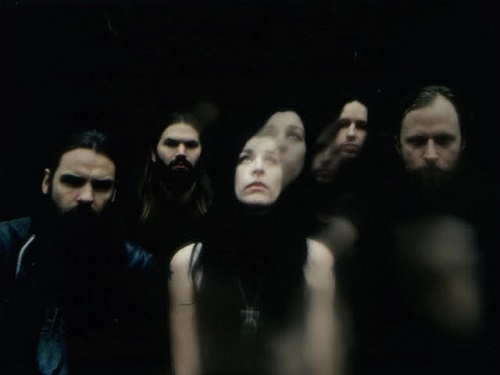 Dool is the fast-rising hard rock band featuring (former) members of The Devil’s Blood, Gold, Herder and singer Ryanne van Dorst. The group has become a hotly-tipped buzz band in underground circles on the strength of its celebrated debut album, Here Now, There Then (stream here), and eye-opening live performances. Dool has just released a new video for the song “The Alpha”, which Loudwire is aptly calling “hypnotic dream sludge” and “a dense wall of a Neurosis-meets-Om funereal haze”. Metal Hammer UK attests that “there’s an attention to detail and layering of lush, symbolic imagery that puts it in a league of its own.” “Watch Dool’s “The Alpha” video at this location.

“The video for “The Alpha” is as well a celebration of will power as it is an ode to transformation, in parallel with the lyrics of the song,” comments Ryanne van Dorst. “It has been truly inspiring to work on this video, and we hope it empowers you as much as it empowers us”.

Dutch for “wandering”, the sound of Dool is distinct and dynamic, radiating an undeniable raw energy. An album of supreme songwriting and remarkable musical diversity, Here Now, There Then blends classic hard rock, gothic pop and psychedelic metal in an ever-surprising manner. Carried by infinite, hypnotic guitar lines, Dool hits every pressure point, striking with the deadly precision of a venomous asp.

“‘Here Now, There Then’ is rife with earworm-y melodies, the production is warm and inviting, and van Dorst’s voice is powerful without seeming harsh or overbearing. Their debut album follows a much-hyped appearance at Roadburn 2016, and offers is a uniquely hypnotic, slow-burning take on 70s hard rock and psychedelia, with showy splashes of goth rock.” – NOISEY