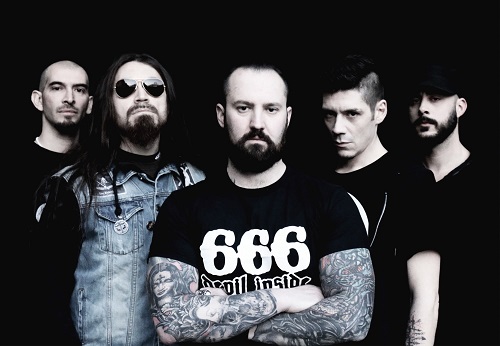 Initially formed two decades ago in Turin, Italy, DYING AWKWARD ANGEL is a total testament to the strength and convictions of true metallers. Enduring line-up changes and travails that would have crushed a lesser band, DYING AWKWARD ANGEL refused to die…instead they have thrived!

Inspired by In Flames, At The Gates, Carcass, Dark Tranquillity, in 2013, DYING AWKWARD ANGEL unleashed their debut full-length album ‘Waiting For Punishment’, following it in 2016 with a well-received EP entitled ‘Madness Rising’. Then in 2018, the band’s current line up with founding member Edoardo Demuro on guitar, Luca Pellegrino on drums, Lorenzo Asselli on guitars, Davide Onida on bass and Michele Spallieri on vocals released their next full length “Absence of Light”.

“We started with the only goal of destroying everything…Over the years we have been working to achieve a more solid and understandable sound. We have created the very personal Dying Awkward Angel sound…’Absence of Light’ is a new era for us; the first official release, a mature sound, an increased richness of themes, a really powerful new voice on our music. You can see it as the might of God when it doesn’t give you what you expected. This new chapter of Dying Awkward Angel is heavy, fast, powerful, dark and bright at the same time. We hope to give the fans the same emotions we have when we play! We hope they have a lot of fun!”

“Absence of Light” is available for stream and download on Extreme Metal Music / Rockshots Records here, iTunes, Spotify, and all other major online retailers.