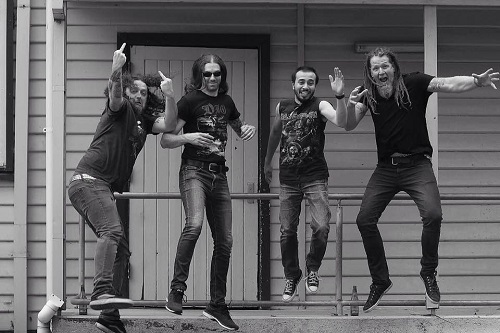 GREYSTONE CANYON is for fans of classic metal and is an album devoted to the band’s love for old western cowboy films and the images these films conjure, the vast plains, endless horizons and the freedom of the Wild West.

Here’s what some of the media outlets are saying:

“This album is full of hard-rocking guitar riffs, soulful acoustic guitar, catchy drumming and vocals that are every bit the classic metal you’d expect them to be; all of this is arranged in a way that’s satisfying to the ear.” – Overdrive Mag

“a brilliant album! Very good pieces, a beautiful atmosphere wrap the listener.Give a chance to this band, it will doesn’t disappoint you with their class, good work guys!” – Rockers and Other Animals Mag

“Inspired by classic HR legends, “While The Wheels Still Turn” is an album that could not only sit well beside the works of those; they’re able to be so various and with a view to the futiue. With a duration of 33 min, we can find six songs and three interludes; this album won’t disappoint you!” – Hard Rock Heavy Metal Mag

“Greystone Canyon has arrived with their debut album, While the Wheels Still Turn, and it is a beauty. A flawless homage to the bands which preceded them and inspired them, this glorious collection of kick ass tracks just teases the senses and reels you in track by track. Mammoth hooks fused with technical brilliance and that old school charm just work so goddamn well, perfectly executed and tasty like momma’s home cooking.” – Rock n’ Load Mag

“The western rock vibe that gets While the Wheels Still Turn started sees the up-tempo Astral Plane grab the attention before In These Shoes delivers head-banging groove. The latter’s deep bassy sound is thrilling.” – Games Brrraaains * A Headbanging Life

“The guitar work on this album is fantastic. But it is the harmonies that catch my attention. “Path We Stray” has some really cool vocal harmony work that echos the dissonance used in old school Ozzy tracks. My favorite track on the album, entitled “River of Fire”, has some solid harmony in a slower song that has a really cool build to a heavy ending.” – The Spinning Thoughts

“While The Wheel Still Turn is a strong debut for Greystone Canyon, a fine and entertaining album classic melodic heavy metal with some interesting twists. Recommended.” – Danger Dog Music Reviews