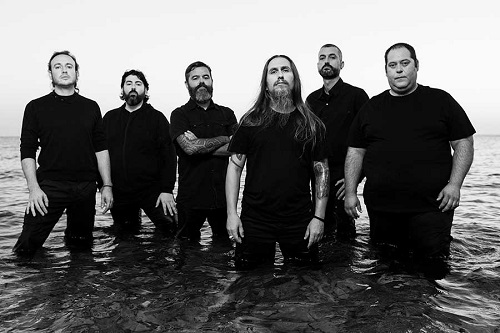 Exhibiting their elegant and gloomy music around the world, Palma, Spain’s melancholic doom outfit HELEVORN have posted their new lyric video “Nostrum Mare (Et deixo un pont de mar blava)”, which is sung in eight different languages. The video is in support of their fourth album “Aamamata” due out this Wednesday, January 23rd via Solitude Productions / Bad Moon Music.

“This is a song about what our Mediterranean Sea was and what is nowadays… I mean, during the past times it was a sea to share, to grow, of course, there was a lot of wars, but it was our true nation, of all of us, so in this song appears eight different languages of our big cultural area (Greek, Maltese, Spanish, Arabic, Catalan, Italian, French, and Hebrew), and we had our friends and fans of the band do the vocals on it.

The lyrics for it are from a poem by Catalan writer, Miquel Martí I Pol, translated into these eight languages. The melodic vocals done by Julia Colom too are really awesome; we had goosebumps on our skin when she was recording her vocal parts. Very epic, gothic and very deep.”