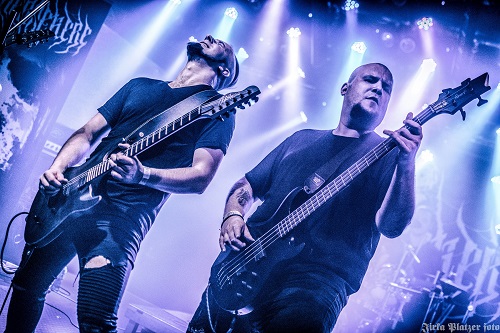 A new videoclip – Impure – by Innersphere was just released. This song is present at their last full-lenght album Amnesia, which was released in April 2018 under Metalgate records. On the waves of gloomy melodic-death metal we are told a short story of a life in sin and impureness. You can feel the flames of your pyre following last tones of this lament… This clip was recorded at a live set in Brno, during Within Destruction tour where Innersphere supports their death metal mates Nahum this year. Marek from Frodys Audiovisual Arts stands behind its creation.

It is our third and probably also a last video to this album. We made this clip for this song due multiple reasons. One of them is to remember this tour, which is the first of this kind we do during our history. We play along great bands (Nahum, Purnama), who are our good friends and also we get a lot of energy from this tour. Also we wanted to celebrate a year anniversary since our first full lenght album Amnesia was released… We chose this song – Impure – for a different attitude to its composition. The song is darker and more progressive than those previously released. This song is following our band almost from the beggining of our activity, also it is musicaly interesting song. But that’s not all. This song is also a confession and I personaly really like it… As an feature, it was formerly written on accoustic guitar…

About the clip making. We chose Marek Frodys for directing/camera/cut this time and we chose him well. Our cooperation went really good and we are maximally satisfied. We believe, that viewers will be pleased as much as we are.“ said Mira Litomericky

In this period, the band is working on a material for a next album. If you want to see them live, you can visit festivals: Metalbarsfest (CZ), Death Coffee Party (CZ), Goat Hell Festival (CRO) or Folkmetal fest (CZ)… The band will also continue second leg Within Destruction tour in Autumn this year on multiple places in Czech Republic, Slovakia and Poland.