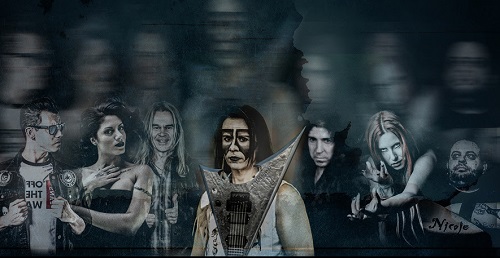 ALPHA OMEGA Management is thrilled to announce the signing of IRONWILL!

Italian guitarist, Salvo Dell’Arte, founder and mastermind of IRONWILL started his musical career at 16. After forming Steelgrey (later known as N.I.B.), Ironwill lost his way in the music since landing to the blues planet after a night spent with Luigi Tempera, the Master of blues, which led him to form, in 2011, Sharpeners with Fabio “Micio” Gattino: an acoustic blues duo. In 2017 Ironwill passes his guitar to a historic Italian band the Feary Tales orphaned by the 6 strings. The new self-titled Feary Tales EP is out now on all digital stores.

Meanwhile Ironwill has been working on a solo project of a concept album with social content about bullying and personae evolution; the story of Jonathan, a kid victim of bullying who lost his soul in a mirror, creating a mask for himself and becoming in the decades of follow Ironwill, the man. Each song tells the passages from Jonathan to Ironwill, the steps of the evolution of the “refuge” character. At the end after falling into the hell of the pain of the soul, Ironwill finds his evolution as a man after the collapse of the dam and the reunion with Jonathan. The man and the child join hands and resume the path of life with the transparency and genuineness of Jonathan and the maturity of Ironwill. The project is enriched by the essential contribution of Marzio Francone as producer and drummer as well as Real Input. The solo album “Jonathan’s Journey” will be released shorty. Stay tuned for more information.

IRONWILL stated on the signing:
“Ironwill is very happy to announce the signing with Alpha Omega Management. When I started recording my solo project, after years in metal bands, I was confident to find a good partner who is able to understand the real meaning of the concept album. “Jonathan’s Journey” is the beginning of a good collaboration with Alpha Omega a professional agency but after all a personal relationship among real people. I’m sure that we will gain our goals.”