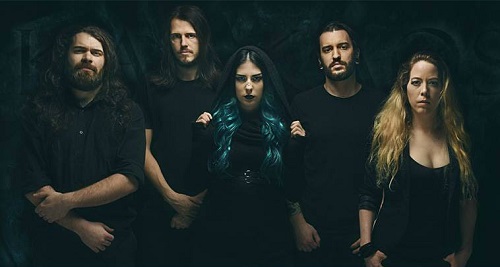 “Karkaos is extremely proud to release its new video for the song ‘’Tyrants’’. This new video crafted by JP Charlebois, known for his work with Ion Dissonance and Slaves On Dope, is the perfect visual vessel to bring this song to your screen by being as brutal, relentless and intricate as the song itself.

We felt that Tyrants was the perfect song to give a second and different look to Children Of The Void. Its powerful meaning can easily be applied to our world and the weird times we all seem to be going through. We need to remember that we will always be stronger united than divided and this song is a testament to people taking the lead when our leaders couldn’t. Make sure to watch it and share it with your friends and pick up a copy of the album or some merch if you enjoyed it.”

“Children of The Void” was recorded, mastered and mixed with Christian Donaldson and Marc-o Frechette at The Grid (The Agonist, Cryptopsy, Neuraxis, Beyond Creation) and Silverwings Studios for keyboards (Blackguard, Ex-Deo , Distoriam) in Montreal, QC. The artwork was made by the immensely talented Marcela Bolívar while the layout was done by Fred Riverin from I Legion.

“Children of The Void” available on Bandcamp, iTunes, Amazon, Spotify and all major online retailers.