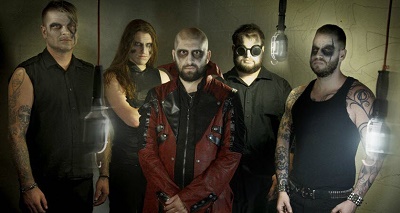 Canadian horror inspired symphonic power metallers MALACODA (named after a demon from Dante’s ‘Divine Comedy’) unleashed their new six track EP ‘Ritualis Aeterna’ this past December. The EP is the follow up to their well-received 2014 self-titled debut album. Packed with dark atmosphere, originality and innovation, this is gothic power metal for the 21st century with intelligence and intensity to rival that of their infernal inspirations.

Teaming up with SkullsnBones.com, the ghouls of MALACODA are premiering a new video for their track ‘There Will Be Always One’, which captures their behind the scenes time in studio recording ‘Ritualis Aeterna’.

“There Will Always Be One is probably our thrashiest track. This song has a lot of anger behind it, and it’s dedicated to those who have gotten in the way of the band and made our journey more difficult. Trust me- it’s not an honor to have us write a song about you!”