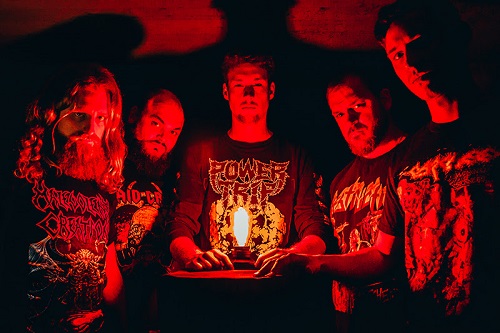 The THRASH METAL alarm by the heavy-workers, which is not over-modern and fabulously grooving, comes into its own on the new and third album in all its intense splendor – brute proclaimed by exceptional vocalist Marc Doblinger.

The new single “Misanthropic Collapse” is available on all streaming service providers. The song is from the third album “In Cold Blood”, which will be released in September 2019.

The music video was produced by Schrankenstein Media. The Bavarian band itself presents the thematic background to “Misanthropic Collapse” as follows:

“Where this passionate and intimate hatred of the self stirs, the urge to self-destruct that rages in some beings, may have different reasons for each person. The result is always the same: if one declares oneself an enemy, one often only has to flee from the environment, away from society, values ​​and morals and into a self-created, gloomy, sad parallel world. As the saving window slowly closes out of eternal black and threatens to collapse, the battle rages against one’s own, inner demons.”
MORTAL INFINITY definitely stand out from the mass of today’s Thrashers with “In Cold Blood” – and they do it without cramping. After all, who has such a huge heart for the underground and the original rebellion of this musical branch can also do a lot with it.

Founded in 2009, MORTAL INFINITY underwent an equally constant and interesting maturing process in which the band incorporated elements from the last Thrash decade before the turn of the millennium.

And the fact that diverse, up-to-date Extreme Metal influences are allowed to let off steam unhindered lends the efficient dynamics of the five-piece a remarkably jagged note.

One of MORTAL INFINITY’s other specialties are well-dosed, skillfully sophisticated melodies that can make true genre hits out of some tracks through the catchiness that is achieved.