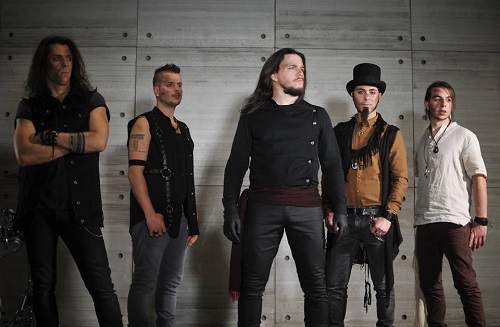 NEREIS have revealed a new single and video for their song ‘Two Wolves’. This is the second video from their upcoming full-length album entitled Turning Point due out on June 8, 2018 via Eclipse Records. The video was directed by Maurizio Del Piccolo, utilizing imagery created by artist Claudio Calefato. Watch the video at this location, and hear the single via Spotify or Apple Music today!

“Two Wolves is a Cherokee native American legend which illustrates the central internal struggle of humanity” says vocalist Andrea Barchiesi. “In this legend, a tribal elder is teaching his grandson about life. He explains that there is a battle between two spirit wolves going on inside each of us. One is evil, and the other good. The first represents anger, greed, arrogance, and self-pity. The second represents peace, love, humility, and kindness.” Guitarist Samuel Fabrello continues. “The grandson thinks about this for a few minutes, then asks which will win? His grandfather replies that the wolf you feed will win.”

Turning Point features twelve hard-rocking songs that take the listener on an all-out aural adventure, ranging from blistering alternative metal to mellow power-rock, and everything in between. The album was produced by Mauro Andreolli at das Ende der Dinge, and the album art was designed by Daniel Hofer of Archetype Design. The band has also released a music video for their previous single, ‘Breaking Bad’ which may be watched at this location.