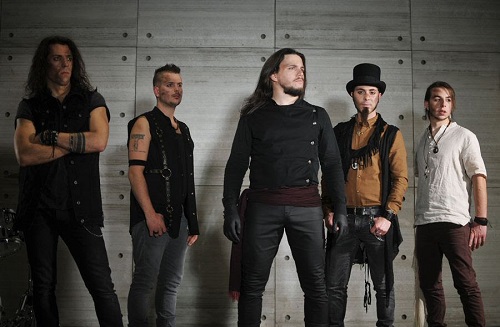 Hard-rocking alternative metallers NEREIS – who just recently joined BULLET FOR MY VALENTINE for a brief string of dates – have released a new epic video and single ‘The Wave (Symphony Version)’, feat. Isabella Turso on piano.

This is a full orchestral version of “The Wave” which originally appeared on the band’s debut full-length album ‘Turning Point’. The video was directed by Maurizio Del Piccolo and Max Benbinelli, and filmed on location in Venice, Italy. The orchestra scenes were shot at the sport center in Albiano Italy, and the orchestra was conducted by Simone Tonin. Watch the video right now at this location.

“When we wrote The Wave, I never imagined that one day we would perform it with a full orchestra” says guitarist Sam Fabrello. “Working with Simone Tonin, who rearranged The Wave for the orchestra, was a great experience. I remember during the video shoot at the sport center in Albiano, we were listening to how this song came out and watching the orchestra perform our song with us… it was very exciting!”

Just recently NEREIS released a new music video for the song “Now”. The video was directed by Maurizio Del Piccolo, and filmed on location at Adrenaline Stadium (Moscow), and A2 Green (St. Petersburg) while the band was on tour in the Russian Federation, as main support for THREE DAYS GRACE in November, 2018. Watch the video right here: https://youtu.be/bt5rZltaRPA

NEREIS (formely knows as BLACK STAR, formed in 2007) is a heavy rock band with a metal edge from Trento, Italy. During the months after the “From the Ashes” EP release and into early 2015, NEREIS performed over fifty live dates all over Italy. In August 2015 the band set out on their first-ever international tour, hitting top clubs throughout Eastern Europe in cities such as Prague, Brno, and Bratislava. In 2016-2017, the band continued to tour and perform locally with bands such as Arthemis, Riot V, and The Danish Royal Hunt, performing also at festivals such as Rock im Ring. In January 2018, the band signed with U.S. based label Eclipse Records, releasing the band’s second full-length album “Turning Point” worldwie on June 8th, 2018. With a new album under their belt, the backing of an established record label, and a strong will to deliver great music to the masses, it’s only a matter of time before NEREIS becomes a household name worldwide!