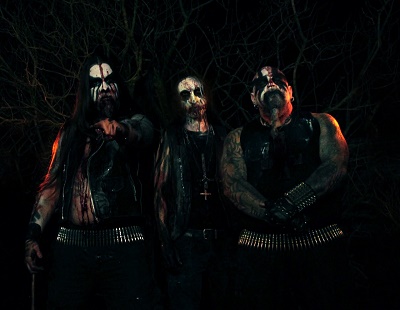 Norwegian black metallers RAGNAROK renew long-standing relationship with Agonia Records and announce European tour
Norway’s RAGNAROK have signed a new three album deal with Agonia Records, continuing the relationship that has so far seen the release of the Norwegian Black Metal veterans’ seventh and eighth full-length albums, “Malediction” in 2012 and “Psychopathology” in 2016 respectively, as well as the special edition retrospective “Chaos and Insanity Between 1994-2004”, which traces the first decade of the band’s history.

Founder and iconic drummer Jontho, had this to say about the decision to stick with the label:

“We looked at several other offers when our contract with Agonia expired, but one of the most important things for us was the kind of relationship we could have with a label. We know that with Agonia we can have open and honest discussions and exchanges of ideas, which always result in something productive for both parties. It’s not just about releases for them, it’s also about all the other things that go into making a band successful”.

“Ragnarok is in a class of its own for delivering more than two decades of truly intensive music. And that’s a heck of a time. One could say a band is burnt out after so many years of artistic expression, but this isn’t the case with Ragnarok. If anything’s burning, it’s their enthusiasm, that’s being well channelized with experience. We are happy to re-new the deal and we are thrilled and looking forward to working on the upcoming releases!”

Formed in 1994 RAGNAROK’s history spans well over two decades. As with any band that has lasted this long, there have been changes in the lineup along the way, not least of which was the decision by Jontho, one of the most recognisable and respected drummers on the Norwegian Black Metal scene, to expand his performing repertoire by laying down his drumsticks and taking over as vocalist. Aside from Jontho on vocals, the band’s lineup includes long-standing guitarist Bolverk (Images At Twilight), session bassist Viti (Images At Twilight, Hinsidig) and drummer Daniel Minge (Dauden).

Having appeared at various festivals over the summer, RAGNAROK is set to play at Mörkaste Småland in Sweden, before hitting the road headlining a series of dates in Europe in the autumn.