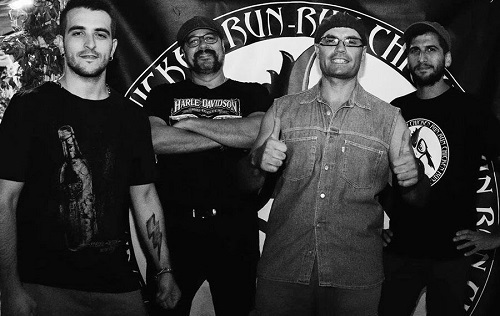 RUN CHICKEN RUN band is born in October 2014. After several adjustments the group reaches the final formation consisting of: Michele Montesi on vocals and guitar, Leonardo Piccioni on guitar, Paolo Scarabotti on bass and Mirko Santacroce on drums. From the first meetings of the band the style was clear: Hard Rock. A hard Rock with blues nuances completely new. In the summer of 2016 he released his first album entitled “Open the grill”. Recorded in the Pink House studio, it is published by RaRa Records, a label that even if it does not deal with Rock music after listening to the songs has decided to expand its channels to this genre. In 2018 the collaboration with the Brothel of Sound Agency begins and in April of the same year Run Chicken Run are the special guest of the Saxons of Oliver / Dawson. The following month the band was supposed to be the special guest of the Phil Rudd’s band (ex AC / DC drummer). Unfortunately, the international artist’s tour was canceled due to passport problems.