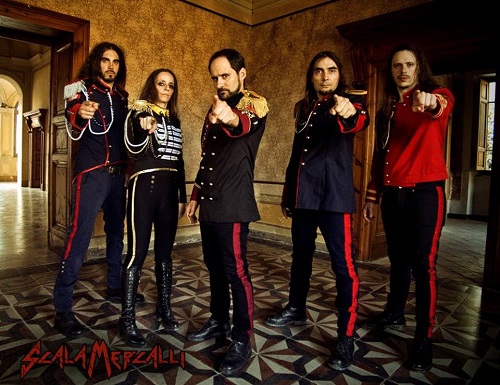 Italian heavy metallers SCALA MERCALLI have finished mixing their new album “Indipendence” at ALPHA OMEGA Studio’s by Alex Azzali. The Album is set to be released on January 25th. Today the band unleashes a new video for “Be Strong”, taken from “Indipendence”, watch it here:

The song is an encouragement in trying to find the strength in all circumstances, fighting for own dreams and ideals, without being overcome by everyday difficulties of life that can sometimes be very hard and heavy.

Stated the band on the song: “Being strong doesn’t mean never falling down, but finding the strength to always get up and move forward. May this song help you all, Metalheads! ”

“Indipendence” will be about the first part of Italian Risorgimento, from Naple’s Reign ruled by King Murat until Mazzini’s Roman Republic, including episodes on Mille (The Expedition of the Thousand) and Brigandage, with some of their main characters. The band will wear the new uniform inspired by the units, from north to south, that in the above-mentioned period fought side by side with the people and contributed with hard sacrifices to build Italian nation.

The band about “Indipendence”:
“This project is about some events we consider of great importance in our country’s history, because they remind us of how important it has been, for a people dominated for years by foreign powers, to fight for ideals of unity and freedom, and reminds also that freedom, in every form, is never a gift but has always to be conquered fighting togheter. Yesterday as today!”

This example applies to every people or nation that wants to be truly free!