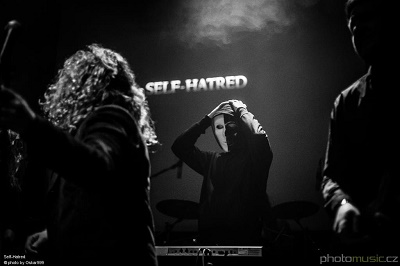 Leave it to Solitude Productions to unearth sublime doom metal from across the world. This year is a gem from the Czech scene, featuring members of legendary Czech bands like Dissolving of Prodigy, Silent Stream of Godless Elegy and Et Moriemur. The album is streaming in full HERE.

Self-Hatred feature members of classic Czech bands such as Dissolving of Prodigy, Silent Stream of Godless Elegy and Et Moriemur. The intention is to create moving, innovative and contemporary doom metal with emphasis on emotive richness and atmosphere. It takes the best elements of doom of this ilk and presents us with distilled emotions of the highest value. Subtly whirling, the music takes you to a different dimension where your emotions are laid bare, the caressing tunes evoking self-empathy that soon transmute into self-hatred – life is full of regrets and wrong choices but it is for us to live on with them. Brimming with such heart-searing melodies, Self-Hatred’s debut is a sublime album that cajoles, evokes sweet pain, and is reminiscent of all the emotions that you hold sacred and pure. ‘Theia’ is a masterpiece.