Il video di Through the Eyes Of A Mad (Sliptrick Records). 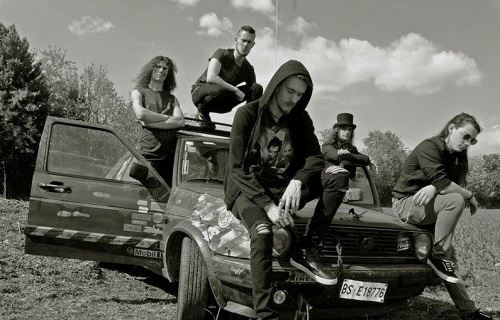 Il video di Through the Eyes Of A Mad (Sliptrick Records).

The song Through the Eyes Of A Mad aims, by means of the compositional spontaneity and hammering rhythm, to communicate the perceptions and give to the listener the feelings perceived by a mad man. The lyrics are simple and the structure of the verses aim to communicate the perpetual weaving and nodding of the fool’s mind. The background of the fool’s wanderings is a city that appears to be twisted and sharpened like a knife against the sky. Sweating pure darkness. From the overwhelming distant structures, you can feel the gaze of a thousand eyes and every sound tears through the air like “a demon’s cry”.
The presence of a fret-less bass guitar contributes in creating a gloomy atmosphere and transforms the shapes into something undefined, fluid. The guitars, harmonized on the minor scale, also give a sense of oppression and darkness. This is a single that detaches from the typical Shantak sound and that introduces a more various and mature compositional phase of the band. Through the Eyes Of A Mad was recorded, mixed, edited and produced by Shantak and Francesco Massari in October 2017. Artwork by Nicola Belotti.