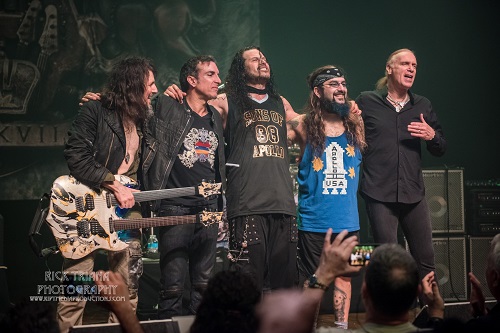 Mike Portnoy comments: “The ‘Signs of the Time’ Video was shot on the recent US tour and is a good taste of what the band is like on stage.
We are about to embark on the band’s 1st tour of Europe and the UK and can’t wait to bring this 5 headed musical monster to our fans overseas all throughout the summer”

The band have further live dates planned for later in year, including an appearance at ProgPower Festival in the US, the band’s first Japanese shows, and more live appearances in Europe including a very special performance at the Roman Theatre in Plovdiv Bulgaria alongside the orchestra of Plovdiv State Opera. Find the full list of those below:

Ticket links for all shows can be found at: https://www.sonsofapollo.com/live

Released October 20th 2017 via InsideOutMusic / Sony, PSYCHOTIC SYMPHONY is available as a 2CD Mediabook (featuring a second disc of instrumental mixes and extended booklet with an exclusive Studio Diary), Gatefold 2LP vinyl + CD (which comes with an etching on side D and the entire album on the CD), Standard Jewelcase CD & digital download. It was produced by the dynamic production duo of Portnoy and Sherinian, also affectionately known as “The Del Fuvio Brothers,” which is the nickname given to them over 20 years ago during their time together in Dream Theater. Get your copy here: http://smarturl.it/SonsOfApolloPS

PSYCHOTIC SYMPHONY has racked up some fantastic reviews:
“Fuck the term ‘supergroup’, that’s not what this is about. Sons of Apollo are simply a group that are super.” – Classic Rock
“Psychotic Symphony is fierce, loud, bewildering, brilliantly performed and monstrously entertaining.” – Prog Magazine
“God-like in conception, stellar in ambition and perfection in delivery.” – Metal Talk