The Festival in uscita il 2 ottobre per Transcending Obscurity 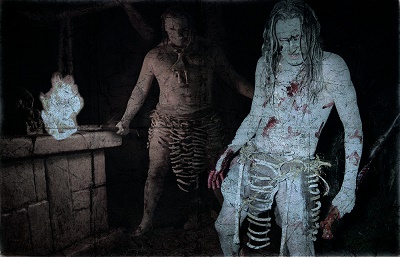 Decibel Magazine, Metal Sucks and others are streaming tracks off this sensational H.P. Lovecraft-based release HERE and HERE. You can’t escape the lure of the Mythos.

– “There’s something wonderfully unsettling about Swampcult” – Metal Injection (US)

– “one of the best and most authentic musical stabs at the Mythos” – Doom-Metal.com (Belgium) 8.5/10

– “The most awesomely disgusting, putrid, dark, and straight up terrifying record” – Headbanger Reviews (US)

– “steeped in an aura of encroaching doom” – No Clean Singing (US)

– “A real tribute to the great writer and a must have for all true lovers of mystical horror.” – Reckoning Hour (Greece)

– “High praise for SWAMPCULT’s The Festival!” – Dire Notes (US)

– “an album full of devilish sounds and lots of atmosphere.” – Franconia Metallum (Germany)

Dutch band Swampcult aren’t just inspired by H.P. Lovecraft, they’ve based an album entirely on his highly acclaimed story ‘The Festival’. Mixing black metal, doom metal, and death metal, they’ve formed a new style that defies easy categorization – to call it ‘Lovecraftian metal’ is perhaps the best way to describe the intriguing music. Each song is divided into chapters tracing the original ‘The Festival’ story, bringing it to life. The sounds of dread were never before so easily captured in this genre. The very vibe of H.P. Lovecraft’s story has been recreated using a mixture of various extreme sounds; from the strange murmurings in the village to the toll of bells, it’s all encapsulated perfectly in one album. To give it visual appeal, a special ‘story card’ is created for each chapter, each having its own artwork and writings, which is given out free with the purchase of any physical product. Swampcult, in addition to devoting an album entirely to H.P. Lovecraft’s ‘The Festival’ story, have written excellent, contemporary music that’s seamless, laden with surprises, and consistent. If there could be a genuine soundtrack for H.P. Lovecraft’s story, this is it. ‘The Festival’ is meant to be heard from start to finish, with at least the lyrics sheet in hand if not the book itself, and is recommended to all those who’re into things horror and extreme.