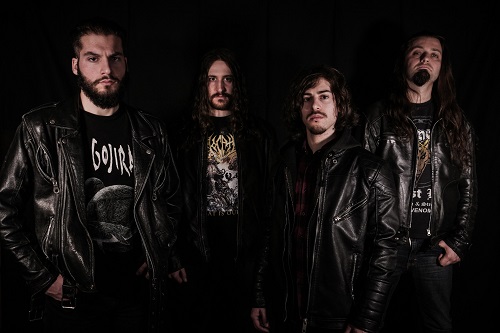 Lead vocalist Loris Castiglia comments, ‘I thought a lot about the visual part of the song while I was working on the lyrics. We felt like it would fit perfectly with the music. Considering that the song doesn’t follow a classic structure but is constantly changing and evolving I decided to divide the whole theme in three parts: decomposition of the human body, merging with nature, rebirth in the form of a tree.

The concept is summed up in the lines “Matter can’t be created / Matter can’t be destroyed” that lead to an emotional and peaceful conclusion in which the sensation of being all part of something bigger is palpable and relieving, especially during the lines “Mother cries and it rains upon your leaves / They’re tears of joy / For winter always turns to spring”.’

Operation Misdirection is the last chapter of a trilogy the band started five years ago with their debut album, ‘Privilege To Overcome’ in 2013. Tours across Europe caught the attention of Candlelight Records and they went on to release their 2nd album ‘Deflect The Flow’ in 2015, a record which saw them take their brand of extreme thrash to the next level and opened them up to a whole new heavy metal fanbase worldwide.

Over the past few years Ultra-Violence have played shows and festivals across the world supporting bands like Discharge, Angelus Apatrida, Tokyo Blade and Rotting Christ, leading to a number of shows in Japan with Skull Fist. They show no signs of stopping and will embark on a European tour to support the release of ‘Operation Misdirection’ starting with the following dates:

“Thrash should be this good more often” – Metal Hammer
“Well worth a look if you fancy a gristly slab of thrash” – Ave Noctum
“Violent and heavy, Ultra-Violence conveys sinister thrash” – New Noise Magazine