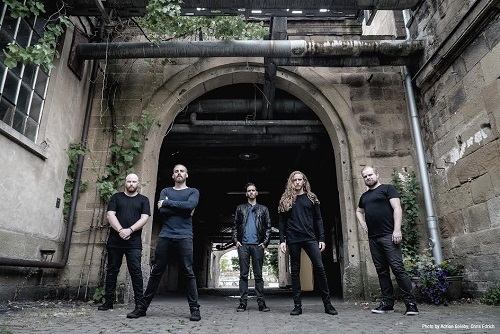 Vocalist Jim Grey explains: “The story of ‘Will’s Song’ is centred around pride and ambition, the human tendency toward self-destruction, the last demand of a proud old man that time is not decay and he is ‘that young man still’.” Goleby has mirrored this in the clouded performances, obscured figures either silhouetted in smoke and colourful light or dissolving into nothing, and the frenetic visuals truly capture the kinetic energy of the song.

The clip was filmed in Northgate, Brisbane as well as the heritage listed (built in 1888) Princess Theatre in Woolloongabba, Brisbane.

Drummer Josh Griffin had this to say:
“With this video being mine and Adrian’s first clip with Caligula’s Horse, it’s great to finally have the new line up out there!”

Guitarist Sam Vallen adds:
“Will’s Song might take some fans by surprise, its heavy and technical, certainly more than anything we’ve created in the past. Adrian has done an incredible job conveying that frenetic power in the clip; it captures the energy we aspire to in concert, but also, through its languid and constantly shifting imagery, reinforces the dark atmosphere hidden below the punctuation of the drums and guitars. Speaking of which, check out the drums and guitar! It’s great to show the new guys off to the world at last.”

The band also recently sat down at the offices of InsideOutMusic in London to chat about the new album, and you can find the first of those interviews here: https://youtu.be/C21-ApKoKb4

Digital pre-orders of ‘In Contact’ through iTunes & Amazon receive ‘Will’s Song (Let The Colours Run) immediately, and the track is available on streaming services now. The album is also available to pre-order on CD & 2LP + CD (including exclusive coloured versions) here: http://smarturl.it/CaligulasHorseIC

As with the band’s acclaimed album ‘Bloom’ before it, ‘In Contact’ sees vocalist Jim Grey and lead guitarist Sam Vallen collaborating closely on the music and lyrics. Vallen comments: “In our creative process every idea is scrutinized, deconstructed, and rebuilt in a way that one of us, alone, could never achieve. We’re one another’s harshest critic, but fortunately we’ve done this for long enough now that our inspiration draws us in a similar direction – we can finish each other’s musical sentences, so to speak. And we’re lucky that’s the case, since In Contact proved to be a much more ambitious undertaking than anything we’d conceived of in the past.”

Vocalist Jim Grey adds: “In Contact has been an enormous proposition – the stories told in this album feel deeply personal, and we’ve never been more excited to share a new work with the world. The sounds on this album are dark and adventurous – but without losing the bittersweet and joyful sounds we developed in writing Bloom.”

As with the band’s second album ‘The Tide, the Thief & River’s End’, the band decided to hang a concept around the entire record, taking it in a direction that would end up being the opposite of its predecessor. “We decided to create a concept album, but one that came from a more personal place: one that would facilitate our creative needs wherever the journey took us” Vallen continues. “The broader concept is based around the nature of art – of what it is that sparks creativity and inspiration, a celebration of what connects us as human beings, the shared space across our many differences.”

Taking in four separate chapters, each one is dedicated to an individual and their own personal journey and how they express themselves through art. “Each of these artists are reaching for something more in their lives, and while disconnected entirely from one another, they are united by that reach: for a better life, but also for something intangible.”

Written between late 2016 and May 2017, the album went through a rapid production/mixing/mastering process encompassing five weeks between May and June. The music felt fresh and the ideas were captured at the peak of their vitality. The music on ‘In Contact’ stretched all of the bands abilities, from the frantic speed and complexity of ‘Will’s Song (Let the Colours Run)’ to the immense scope and variety of the 16-minute album closer, ‘Graves’. This is Caligula’s Horse at their most ambitious and progressive.

Immagine incorporata 1
The full track-listing is as follows:
1. Dream the Dead
2. Will’s Song (Let the Colours Run)
3. The Hands are the Hardest
4. Love Conquers All
5. Songs for No One
6. Capulet
7. Fill My Heart
8. Inertia and the Weapon of the Wall
9. The Cannon’s Mouth
10. Graves

The band recently completed a short European run, including a sold-out show in London, plus dates with the likes of Opeth, Anathema & Pain of Salvation. To coincide with that, InsideOutMusic reissued the band’s first two albums ‘Moments From Ephemeral City’ & ‘The Tide, the Thief & River’s End’ and you can get those below:
‘Moments From Ephemeral City’: https://smarturl.it/CaligulasHorseMFEC
‘The Tide, the Thief & River’s End’ : https://smarturl.it/CaligulasHorseTTTTRE

Caligula’s Horse will head out on a headline tour of Australia in support of the new album and you can find those dates below:

The band’s last album ‘Bloom’ was released in 2015 and enjoyed much praise for its multi-faceted dynamic and masterful production. It mines influences from heavy rock to jazz and beyond, making it a uniquely enticing sonic entity, and a powerful addition to the high quality canon of progressive alternative rock. It is a unique thrill to watch a band’s momentum build so steadily and confidently.