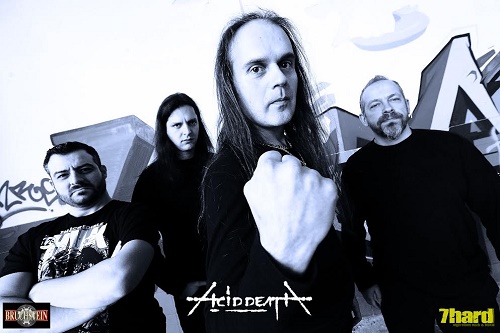 Here we are with a very interesting interview with the guys from Greece, the mortal Acid Death. From the past comes the storm.

Hahaha! Yes, actually we are young boys! It is really cool to be in this circus for so many years and sometime this gives you some kind of “wisdom”. Especially when you meet young guys who try to make their first steps in music and ask things all the time!

ME The story of Balance Of Power is hard and long…

Yes, actually it is. “Balance Of Power” was Acid Death’s very first album, recorded back in 1990. Production problems delayed and finally cancelled the release. In 1993 the first label we had contract with, decided to take 3 songs and release them as 7″ ep, that was Acid Death’s first official release, the EP “Apathy Murders Hope” after 25 years that first album released in March/2017 on its original form (vinyl/cassette)

ME What were the differences between then and now?

There are many differences from those years. At first technology can help musicians today. Everyone can have really good results on recording, mixing, mastering… The promotional services today are of course more professional; there are many ways that a band or musician can promote its work… On the other hand all those “goodies” make the fans not to pay enough attention to the new bands. There are many cases that new and good recordings find their way only in youtube and not to a record label since everyone knows that a new band is really hard to get out in the light…

ME What are your influences in music?

At first American Death Metal of early 90’s. European Thrash metal, today’s Gent and on the other hand, Jazz/fusion and Progressive Rock. As you can see we are not a typical Death Metal band… ME Why in Greece the metal scene is different?

Yes, actually it is not “different” it is a up-and-coming scene. There are really many good bands from all music genres. Everyone who has the ability and the time to check our bands, he will see that.

ME How is the situation now in Greece?

After some years under really hard circumstances, economical, political etc, it seems that things are on a good way. Everyone is working hard everyone has the opinion that only with good and hard work we can have good results..

ME Do you have any future projects?

We are preparing the songs for Acid Death’s new album. Hopefully we will enter studio in October/2017. The new album will be out in 2018, so there is a lot of work to be done!